History of the Ancient Crop

The Great History of Garlic: An Ancient Crop

Garlic is one of the oldest known horticultural crops in Europe and Asia. Native to Central Asia, garlic is part of the culture of civilizations in Europe, Africa, and Asia. Writings from ancient Egypt and India dating back 5000 years mention garlic. Garlic was in action in the Fertile Crescent, as the Babylonians used it 4500 years ago. There is evidence that suggests garlic was cultivated in China 4000 years ago. Garlic appears throughout the medicine, cuisine, religious traditions, and folklore of some of the world’s great ancient and modern civilizations. 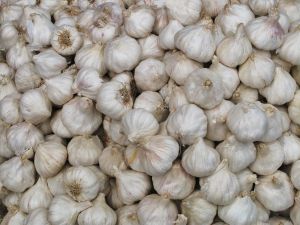 Prized for its fortifying and disease-fighting effects, garlic was eaten by slaves, laborers, and soldiers in Egypt, Ancient Greece, and Ancient Rome. Oddly (or unsurprisingly, depending on your outlook) garlic was listed among one of the things that the Hebrew slaves missed about slavery in Egypt. “We remember the fish which we did eat in Egypt for Nought, the cucumbers, and the melons, and the leeks, and the onions, and the garlick.” (Numbers 11:5) Garlic was even taken by athletes during the first Olympic Games.

In ancient India garlic was used to treat ailments such as arthritis, parasites, leprosy, and heart disease, as well as symptoms like fatigue and indigestion. The Sanskrit word for garlic is mahoushudh, which means panacea, or “cure-all.”

Even before the development of germ theory, garlic was used to ward of germs. In Europe in the Middle Ages, French priests would wear masks of garlic to protect against the bubonic plague. Louis Pasteur, the French chemist whose discoveries paved the way for modern sanitation, recorded garlic’s antibacterial properties in 1858. Soldiers fighting on the Western Front in World War I and in the European theatre of World War II would use garlic to fight infection by bandaging whole cloves on – or sometimes in – their wounds.

In many cultures, garlic’s life-giving properties were associated with a supernatural ability to ward off evil forces. In the Middle Ages in Europe, plague doctors would wear masks of fragrant herbs and spices when treating the sick and handling the dead during the years of the Black Plague. Present among that melange of spices was garlic. Though neither the mere presence of garlic nor its aroma can ward off disease, garlic’s use in this way shows its cultural significance. In Hindu tradition, garlic is considered to arouse ones desires when consumed and, in the interest of piety, its ingestion is cautioned against during holy days and festivities. Western archeologists discovered clay models of garlic bulbs, as well as preserved garlic, in Tutankhamen’s Tomb in Egypt.

Korean folklore has an origin story that involves a tiger and a bear praying to the Supreme Divine Regent, Hwanung, that they might become human. The deity responds, in part, by giving each animal 20 cloves of garlic.

Garlic is a food staple in the Mediterranean, parts of Europe, Asia, and North Africa. In Ancient Japan and Ancient China, Garlic was used as a food preservative and accompanied a daily diet of raw meat. The British and American literary canon is filled with stories of European travelers, particularly to France and Italy, overcome by the prevalence of garlic (especially its odor) in cuisine and daily life.

Garlic only recently became a staple of North American cuisine. For many years the stigma of “garlic breath” kept garlic’s (rather understandable) popularity from crossing the Atlantic (or Pacific, depending on how you look at it). In the early part of last century in the United States, garlic dishes could only be found among the ethnic cuisine of cities’ working-class immigrant neighborhoods. Discrimination against Southern and Eastern European migrants in the US in the late Nineteenth and early Twentieth Centuries can even be detected in some of the slang used to describe garlic, such as “Italian perfume” and “Bronx vanilla,” which refers to the borough of New York where many Southern European immigrants lived.

By the mid-Twentieth Century, garlic slowly worked its way into common use in American cuisine. By the 1990s, the trend of “authentic ethnic cuisine” in the US saw the use (and sales) of garlic skyrocket. Currently, the United States consumes over 250 million pounds of garlic each year.