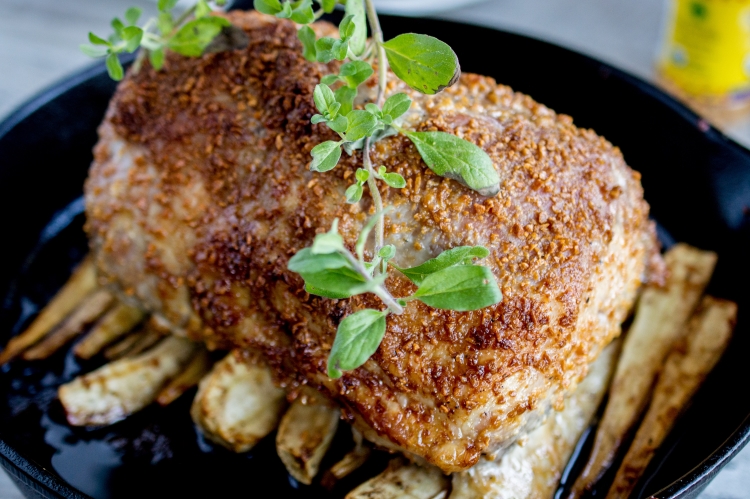 Sprinkle a generous layer of Garlic Gold® Sea Salt Nuggets on a roast before it goes into the oven, and something magical happens — it browns and caramelizes into an amazing, crunchy coating! We love this way of cooking roast beef, chicken, and for tonight’s dinner, a boneless pork loin. Marinated in our Balsamic Vinaigrette, it roasts on top of a bed of parsnips for a main dish and vegetable side all in one skillet.

You can pick up a boneless pork loin at just about any grocery store. The perfect size for feeding a group of four to six (or two with leftovers for next-day sandwiches), they’re usually sold in two and a half-pound pieces.

Using a digital cooking thermometer is the easiest way to ensure that your roast is cooked through. Go for the kind with a remote display and an oven-safe probe — this way, you never have to open the oven while the roast is cooking to check its temperature! Simply insert the thermometer probe into the thickest part of the roast, set the alarm for your desired temperature, and it’ll sound when dinner is ready. (We’ve also included a note on how to make this recipe if you don’t have one on hand.)

This meal does take about an hour and forty five minutes to cook, but on the plus side, all of that time is completely unattended. Once dinner is in the oven, it roasts itself without any more effort from the chef.